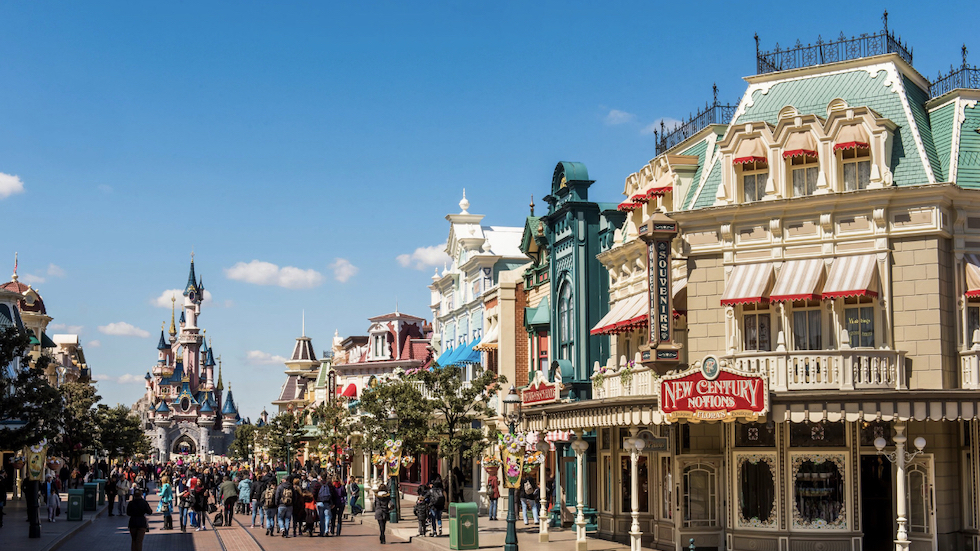 The Magic Of The Magic Kingdom

When entering Disneyland, you're immediately faced with Main Street USA. A nostalgic recreation of the quintessential mid-century American town, you're made to feel right at home. While backed-up LA freeways are just a handful of miles away, visitors are shown an alternate reality. They're transported into a fantasy world where they can enjoy the car-free scenery and traditional townscape.

It's the magic of Disney at work.

Main Street USA, a tangible realization of the Hollywood movie town. It serves as the “opening scene” for the Magic Kingdom experience. It immediately sets the tone. It provides a transition between the outside world and the carefully-created Disney experience.

Based on small-town Marceline, Montana, Main Street offers the colorful, mixed-use city experience of our dreams. One that's sorely missing in our drab cities of strip malls and concrete boxes. Walking down Main Street, one feels right at home. It somehow feels right.

City planner James Rouse, in a commencement speech at the Harvard Graduate School of Design, insisted that “the greatest piece of urban design in the United States today is Disneyland. It took an area of activity—the amusement park—and lifted it to a standard so high in its performance, in its respect for people, in its functioning for people, that it really became a brand new thing.”

Disneyland and Main Street USA are masterpieces of urbanism. They offer a masterclass not only in experience design, but also in creating better and more liveable towns and cities.

The Magic At Work

Opened in 1955, Disneyland and Main Street USA offered an escape to a fantasy world. One of seven dwarves and dragons, princesses and pirates. It also offered an escape to the fantasy of a pleasant, pedestrian-friendly urban environment with a civic square and public transport. The magic amplified with every street, building, and trashcan.

In post-World War II LA, the car had become the dominant form of transport. A dominance which lasts until the present day. Millions of G.I.s had come back and the economy was booming. Never was the American Dream so attainable, private car ownership included. With it came a change in the urban fabric. Pedestrian zones made way for on-street parking, massive highways were constructed, and American cities started to change.

Walt Disney became increasingly disinterested in making films after World War II. Instead, he turned to building places that people would enjoy spending time in. Recreating the unique charm of small-town America at the turn of the 20th century, Main Street USA and Disneyland were filled with hope and optimism for the future: a place where the ideal Hollywood town became a reality.

“The Magic Kingdom is something of a dream as far as urban planning goes,” says Laura Cole of Rollins College, FL. “It has public transportation (the train, streetcars, and monorail); a center (Cinderella’s Castle) from which everything else radiates; a Main Street with shops, restaurants, and entertainment; a bustling economy with many job opportunities; and unparalleled coordination, from the music to building heights, color schemes, and landscaping.”

Attention went into the smallest of details. The houses of of Main Street USA use forced perspective to appear taller and frame Cinderella's Castle. This makes it seem larger than it is. The ground level floors were built at approximately 7/8 size, with the upper floors becoming progressively smaller. Walt Disney would demand the rooftops on Main Street be lined with real wrought iron, rather than plastic.

Main Street is the epitome of what's called gentle density. It sketches a fantastical image of a desirable neighborhood to live and work in. With its attached top-level housing, the interplay between stores and (simulated) apartments generates a complete streetscape. You could actually see yourself living there, unlike many a shopping street in the modern US.

The pedestrian-first, car-free nature of Main Street further compounds the charm. Walkability in cities has been associated with higher levels of arts organizations, creativity, and civic engagement. Having streets be safe and quiet enough for a stroll is soothing. It speaks to something primal in us. It must come as no surprise then that all of Disneyland is set up in the same way.

“I want a hub at the end of the Main Street,” Walt Disney said. “The other lands will radiate, like the spokes of a wheel … Disneyland is going to be a place where you can’t get lost or tired unless you want to.”

As a further inditement against the rise of automobiles, Disneyland boasts a wide array of public transport options that would make many large cities look on in envy. There's the world-famous Disneyland Railroad. The Monorail, which was the first of its kind in the Western Hemisphere. And that's not to mention the dozens of other options: the horse-drawn streetcars, the Peoplemover, and the double decker busses.

Historical geographer Richard Francaviglia described Main Street USA as “one of the most successfully designed streetscapes in human history.” With it, Disney created the most pleasing street in the world.

What can our cities learn from it?

Jane Jacobs. the most famous urban activist in American history, would love Disneyland. Jacobs, who went toe-to-toe with Robert Moses’ plans to demolish large parts of New York City's West Village, had a love for great neighborhoods. Diversity, mixed-use, density, and dynamism is what she fought for.

Jacobs figured out three principles that should guide urban design: mixed-use, density and permeability. This is what made the West Village great. Mixed-use zoning with businesses and houses seamlessly blending into one another. Small winding streets that encouraged exploration. According to her, these principles contribute to creating livable communities.

Mixed use goes against the idea of geographically separating different types of zoning. Jacobs believed that a mix of different activities, building types, and uses make a place feel more alive. You only need to look at the most popular streets in the world to know she's right. The best streets have offices, housing, shops. There are people on the street around the clock. It's these types of streets where you'll find a small dusty bookshop, a Polish supermarket, yoga studios, and architectural firms hidden away, usually with housing above the businesses. It's the exact opposite of a big shopping mall surrounded by miles of suburban housing.

Building high-density is an added bonus. Contrary to popular belief, density has a positive impact on health and productivity. A high building density allows for less car use. People will have to travel less to go to the store and they're therefore more likely to walk. Not only is walking healthy, it's also a simple way to reduce car emissions and is a surefire way of supporting local businesses.

Finally, permeability refers to the belief that people should have a choice of what roads to take in order to get to their destination. Having grid-like roads is never efficient for anyone. Winding streets, tiny alleys, and gentle-curving roads make it easier to engage with the urban environment. It allows for more exploration, more creativity, and a more dynamic feeling to permeate the city lifestyle.

Walt Disney unknowingly followed a lot of Jacobs’ ideas. Disney tried to observe how people use space. Instead of building paths in advance, he thought it made more sense to watch people walk around and see where the tracks in the grass appear. These tracks should then be used as blueprint for paved paths or even roads.

Good architecture and design pervaded everything Disney did, an ethos that's persisted to the present day. Michael Eisner, Disney CEO in the 1980s, said that if a building is going to hold Disney offices, house Disney guests, or sell Disney products, it ought to feel not like a separate workspace or hotel or shop but like an extension of Disney itself.

Nowhere is Walt Disney's personal touch more visible than in the comparison between Disneyland in California and Disney World, in Florida, which was built after Walt Disney’s death. While following the same formula as the original, Disney World feels slightly off. There's something missing.

The Magic Kingdom is a copy of Disneyland, albeit one without Walt Disney's attention to detail. The design seems rushed. The street are less inviting, having been designed to be wider to accommodate a greater number of guests. The atmosphere is less welcoming. Rather than having ingeniously engineered public transit, park guests are ferried between the different parks in shuttle busses.

Originally, Disney planned to build an entire city on the Florida site. The theme park was merely meant to attract tourists and provide employment. The city, which Walt called the — wait for it — Experimental Prototype Community of Tomorrow (EPCOT), was meant to be the model for a space-age city.

In a film prepared in 1966 to brief Florida legislature on the project, Disney said the following about EPCOT:

“I don’t believe there’s a challenge anywhere in the world that’s more important to people everywhere than finding solutions to the problems of our cities. But where do we begin? How do we start answering this great challenge? Well, we’re convinced we must start with the public need. And the need is not just for curing the old ills of old cities. We think the need is for starting from scratch on virgin land and building a special type of new community.“

Cities are changing in the 21st century. Our infatuation with cars has slowly stopped. We've come to realize that congestion will not be solved by adding extra lanes to our highways and that suburbia and strip malls don't make for enjoyable living. In its stead, we've seen increased interest in revivalist architecture, gentle density, walkable cities, mixed-use zoning, and investing in bike and public transit infrastructure.

Rather than starting from scratch, there's plenty of inspiration out there. We've got millions of examples of what not to do. And we've also got examples of great urban design. The charming streets of old Europe, the colonial architecture in New England, and the hustle and bustle of the West Village in New York.

Living in great communities and cities is not unattainable. We can follow Disney's example. We can look to fantasy and theme parks for inspiration in making better cities.

And maybe one day, it won't be fantasy and longer.