The Best Businesses Are Flywheels 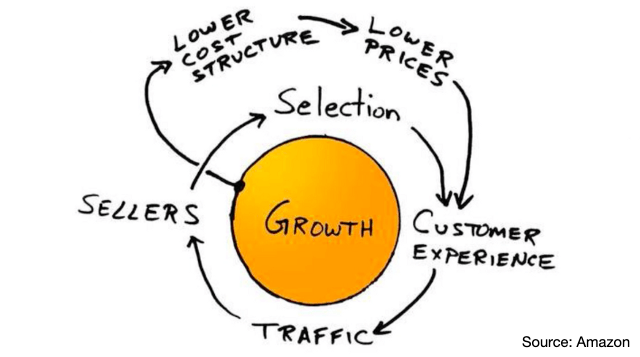 Everyone knows Disney, with its multi-billion dollar movie franchises and countless theme parks. There's no two ways about it: the House of the Mouse is one of the most dominant and culturally-significant companies in American history.

And what's most interesting that Disney's core business hasn't changed since Walt Disney was still alive.

This image of the "Disney Flywheel" has been making the rounds on the Internet lately. Drawn by Walt Disney in 1957, it shows how Disney's businesses help support and grow one another. When there's success in one area it inevitably leads to success in others. Disney's entire business is one massive positive feedback loop.

It's clear that the theatrical films are at the core of the flywheel. Everything in the Disney empire revolves around coming up with new worlds, characters and stories, which then provide the IP for all their other businesses.

Take Frozen, for instance. When it came out in late 2013, it was a smash hit. 'Let It Go' was played on repeat in every household with kids. (To the annoyance of parents everywhere) Elsa dresses were in short supply across the globe. Wherever you went, you were confronted with Frozen advertising and merch. Disney immediately started introducing Frozen-themed events and experiences in their theme parks, leading thousands of little girls to trample their way to the nearest land of the Mouse. And so a new generation of Disney fanatics was born, all because Disney leveraged their Frozen IP across a wide range of business units. This is the Disney Flywheel in action.

Disney knows that they're not just in the movie business. They're in the branding business. Every time Disney releases a new movie, the flywheel gets cranked. With every new piece of merch and new ride at Disneyland, Disney's brand grows and the flywheel starts spinning a bit faster. With every cycle, it provides more value and entertainment to its customers while growing products and brands, increasing revenue, creating new markets, and encouraging audiences to identify more with the Disney brand. The Disney Flywheel is born.

All Great Businesses Are Flywheels

Disney is not the only one to have realized the power of flywheels and positive feedback loops. Some of the biggest and most dominant companies on Earth have leveraged the exact same strategy to great success;. These are what I call Flywheel Businesses.

In late 2001, Amazon was in a critical phase of its life. It had barely survived the Dot-Com crash of 2000 and had a hard time figuring out what to do. During discussions with Jim Collins, of 'Good To Great'-fame, the concept of a flywheel was created to intuitively show how Amazon could compete, grow, and eventually dominate. Bezos then created this now-famous napkin sketch of the flywheel that would see Amazon grow to the behemoth it is today.

Amazon's number one priority should be to drive down prices for their customers. They could do this by making better deals with suppliers, transforming marginal costs into fixed costs, and through economies of scale. With lower prices, shopping at Amazon then becomes more attractive for customers. That causes more third-party sellers to jump onto Amazon's platform, which then improves the selection available. Besides creating a better customer experience it also leads to greater economies of scale, further driving down prices. This pulls in even more customers, leaving us where we started off at the beginning of the flywheel. As Brad Stone said in 'The Everything Store', “the flywheel would turn, building momentum. Push the flywheel; accelerate momentum. Then repeat, then again, and again, and again."

And this is what the concept of a flywheel boils down to: creating positive feedback loops in your business so that success in one area encourages growth in another. The more energy is dumped into the flywheel, the faster it'll spin, which'll help it speed up even more. Feed any part of the flywheel and it'll accelerate further and further.

Another example of a Flywheel Business is Apple. Apple is (in)famous for it's tightly controlled ecosystem, superior hardware, and rabid fanbase. And it's all by design.

Think about it. Whenever you dip your toe into the Apple ecosystem, everything is trying to pull you further in. If you've got an iPhone, you witness the smoothness of iOS, the seamlessness of iCloud, and the sublime build quality. With the disappearance of the audio jack, there's a large incentive for you to go ahead and buy AirPods next — after all, they're tailor made for the iPhone, right? Now that you've got those, whenever you need to buy a new computer, buying a Mac becomes a lot more tempting. After all, you're already in the Apple ecosystem. Next time you're in the market for a smart watch, home automation system or $1,000 monitor stand, you'll probably turn to Apple.

I'm the perfect example of this phenomenon. I started off a MacBook several years ago and instantly loved it. Now, I'm on my second Mac, have transitioned to most of Apple's software, recently bought a pair of Airpods, and my next phone is almost certainly going to be an iPhone.

Multi-billion dollar businesses aren't the only ones capable of harnessing the awesome power of flywheels. You and I can use flywheels to get new a perspective of our business and to see how different areas interconnect and promote each other.

Recently, David Perell posted this diagram of his business model. He writes, he's active on Twitter, he invests — he sure isn't idle. Remember that the more interconnected a node is, the more important it is. In David's case, it's very clear that garnering email subscribers is at the core of his business. It's his number-one metric. Everything else is either directly fueled by his email list or has a symbiotic relation with it. His essays and Youtube, for example.

David's business lends itself extremely well to becoming a flywheel, especially given that he can reuse his content again and again. An essay can be summarized into tweets, expanded upon in a YouTube video, and covered during a podcast episode. So a single piece of content can generate outputs for four different areas of his flywheel. In return, sending out a tweet might result in more followers, email sign-ups, etc. The exact same goes for his YouTube and podcasts.

Thinking of our own businesses as flywheels allows us to figure out where our priorities should lie — such as email in the case of David. It also helps us figure out where we're leaving potential opportunities on the table. What's more, it could allow you to come up with new ways, products, services or initiatives that redirects the energy in the flywheel (i.e. finding a way in the case of David for his podcasts to direct back into his essays, or his Youtube to promote his book).

As you start adding more aspects to the flywheel, it'll become easier to transfer energy over from one area to the next. With every node added, the total number of connections increases. This in turn leads to further energy transfer, leading to a flywheel that's spinning faster and faster.

Whether you run a small side-project or a VC-backed startup, it's worth considering what your flywheel looks like. Whether they look like, Flywheel Businesses are the best businesses.