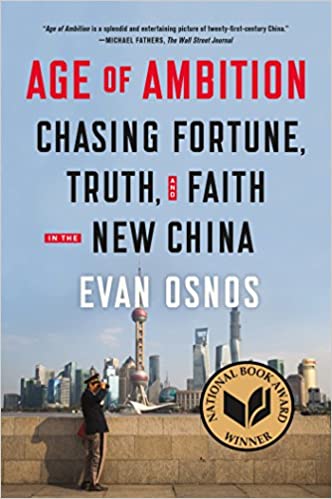 Age of Ambition - By Evan Osnos

A thorough look at the rise of China and how they're coping with their massive economic growth. Highlights a lot of interesting peculiarities surrounding religion, corruption, infrastructure, and the sheer scale of the growth of China.

The greatest fever of all was aspiration, a belief in the sheer possibility to remake a life. Some who tried succeeded; many others did not. More remarkable was that they defied a history that told them never to try.

China today is riven by contradictions. It is the world’s largest buyer of Louis Vuitton, second only to the United States in its purchases of Rolls-Royces and Lamborghinis, yet ruled by a Marxist-Leninist party that seeks to ban the word luxury from billboards. The difference in life expectancy and income between China’s wealthiest cities and its poorest provinces is the difference between New York and Ghana.

China’s reforms had no blueprint. The strategy was to move without losing control—to “cross the river by feeling for the stones.”

When a Chinese friend asked which American cities to visit on his next trip to the United States, I suggested New York, and he responded as tactfully as he could, “Every time I go, it looks the same.” In Beijing, I never passed up an invitation, because places, and people, vanished before you had a chance to see them again.

in 1985 the government officially permitted rural people to live and work temporarily in cities. In the next eight years, the number of rural migrants reached a hundred million.

It was 1995, and already the income gap between the countryside and the city in China was wider than anywhere else in the world except Zimbabwe and South Africa.

By 2007 the top 10 percent of urban Chinese were earning 9.2 times as much as the bottom tenth, up from 8.9 times the previous year.

In the age of ambition, life sped up. Under socialism, there had rarely been any reason to rush. Except for Mao’s fantasies of leaping forward, people worked at the pace of the bureaucracy and the seasons. Moving faster or more efficiently, taking greater risks, would add little to the dinner table. But all of a sudden, China was gripped by a sense that the country was running late.

When I’d arrived in China in 2005, there were only sixty-five Chinese students in American private high schools, according to the U.S. Department of Homeland Security. Five years later, there were nearly seven thousand.

Every six hours, the People’s Republic was exporting as much as it did in the calendar year 1978,

China was building the square-foot equivalent of Rome every two weeks.

China is building more high-speed railroads and airports than the rest of the world combined.

by 2007, when Siu began to visit, Macau’s casino revenues had surpassed those of Las Vegas, until then the world’s largest gambling town. Within a few more years, the quantity of money passing through Macau would exceed that of Las Vegas six times over.

In 2010, high rollers in Macau wagered about six hundred billion dollars, roughly the amount of cash withdrawn from all the ATMs in America in a year.

Xinhua, the state news service, published a story on its website, detailing how China’s Shenzhou VII rocket made its thirtieth orbit of the earth. The story had plenty of gripping detail—“The dispatcher’s firm voice broke the silence on the ship.” Unfortunately, the rocket had yet to be launched—the news service later apologized for posting a “draft.”

At the beginning of 2005, China had about one million bloggers; by the end, this figure had quadrupled,

Sex was so stigmatized in the Maoist period that doctors met couples who struggled to conceive because they lacked a firm grasp of the mechanics.

Students were taught that the bourgeoisie and other “class enemies” were “blood suckers” and “vermin.” The zeal reached its greatest intensity during the Cultural Revolution, when the military went so far as to eliminate rank, until this created chaos on the battlefield and soldiers had to identify one another by the number of pockets on their uniforms. (Officers had two more than enlisted men.)

Corruption of one kind or another costs China 3 percent of its gross domestic product—more than the national budget for education.

The financial crisis caused the Chinese goernment to start investing in infrastructure on a mind-boggling scale. The surge in loans in 2009 was larger than India’s entire GDP. Wuhan planned to build 140 miles of new subway lines in the seven years that New York City set aside to build 2 miles of the 2nd Avenue subway.

In 2003, planned to build seventy-five hundred miles of high-speed railway—more than could be found in the rest of the world combined.

With a total investment of more than $250 billion, the undertaking was to be the world’s most expensive public works project since President Eisenhower’s Interstate Highway System in the 1950s.

Every country has corruption, but China’s was approaching a level of its own. By 2012 the richest seventy members of China’s national legislature had a net worth of almost ninety billion dollars—more than ten times the combined net worth of the entire U.S. Congress.

In the summer of 2012, people noticed that another search word had been blocked. The anniversary of the Tiananmen Square demonstrations had just passed, and people had been discussing it, in code, by calling it “the truth”—zhenxiang. The censors picked up on this, and when people searched Weibo for anything further, they began receiving a warning: “In accordance with relevant laws, regulations, and policies, search results for ‘the truth’ have not been displayed.”

China churns out more television programming than any other country—more than fourteen thousand shows a year—but other countries don’t want them, so China imports fifteen times as much television content as it exports.

The Kung Fu Panda problem: The most successful film ever made about two of China’s national symbols, kung fu and pandas, had to be made by a foreign studio (DreamWorks), because no Chinese filmmaker would ever have been allowed to have fun with such solemn subjects.

China was producing more scientific papers than anywhere but the United States, but on measurements of quality (how often the average paper was cited by others), China was not even in the top ten.

At one point, Chinese programmers were barred from updating software to version number, 0.6.4, which corresponds with June 4, the date of the Tiananmen Square crackdown.

in China, people joke that tax evasion is the national sport. Government researchers estimated in 2011 that tax fraud cost the state ¥1 trillion—about $157 billion—and they found that the largest culprits were, in fact, state-owned enterprises.

For all China’s achievements, it still had a per capita income somewhere between Turkmenistan’s and Namibia’s.

By 2011 nearly 70 percent of the nation’s gross domestic product was going to infrastructure and real estate, a level that no other big country had ever approximated in modern times.

American and Chinese negotiators met at the Ministry of Foreign Affairs to find a solution. They began at positions far apart: The Americans suggested Chen could study in Shanghai, where New York University was preparing to open a law school. The Chinese suggested that he should be charged with treason.

In Chinese we say, ‘Word of mouth is faster than the wind. It passes from one person to ten, and from ten to a hundred.’”

If China did not begin to integrate them into the cities, the urban underclass would reach five hundred million people by 2030 (half the entire urban population), but the government found this fact uncomfortable, so in December 2010 the agency responsible for unemployment data put out a set of rosy statistics reporting that more than 90 percent of the previous year’s college graduates were now employed.

To remain the Party in Power, the Communist Party knew it must continue to allow people to prosper. It planned to build another hundred thousand miles of highways, another fifty new airports, and more than five thousand additional miles of high-speed rail.

Chinese leaders were facing a choice: to continue growing, they could adopt a more democratic form of government, as South Korea did in the 1980s, or they could recommit themselves to authoritarianism. Historically, the latter approach was risky. Over the long term, authoritarian states do not grow as reliably as democracies; they are fragile, and they tend to thrive only in the hands of visionary individual leaders. “For every Lee Kuan Yew, of Singapore, there are many like Mobutu Sese Seko, of the Congo,”

So far, China’s middle-class activists generally sought to reform the government, not replace it. In many countries, a more educated and entrepreneurial middle class has demanded greater control over its affairs. China had already passed the threshold into what political scientists call the “zone of democratic transition”—when a country’s per capita income exceeds four thousand dollars, and the correlation with regime change rises sharply. By 2013, China was at a level of eight thousand five hundred dollars. The China scholar Minxin Pei examined the twenty-five autocracies with higher levels of income and a resistance to democratization. He found that twenty-one of them were oil states. China was not.

The one-child policy had sharply reduced the number of young workers who had once made Chinese factories so inexpensive. Between 2010 and 2030, China’s labor force would shrink by sixty-seven million people, the equivalent of the population of France. What’s more, China was devoting half its GDP to investment—a higher level than any big country in modern times—but growth was still slowing, which meant that investments in new equipment and other capital weren’t yielding as much growth as before.

Skyscraper magazine, a Shanghai publication that treated tall buildings like celebrities, reported in 2012 that China would finish a new skyscraper every five days for the next three years; China was home to 40 percent of the skyscrapers under construction in the world.