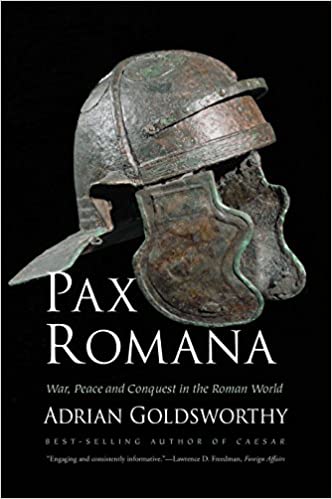 A great look into the day-to-day running of Rome and how the population as a whole thought, acted, and was governed. Accessible to a wide audience, but a definite treat to history nerds like me.

The Romans were warlike and aggressive, but that scarcely requires saying for empires are not created or maintained without violence.

The Romans were incredibly good at the art of conquering and ruling. When the empire fell, there was no trace of independence movements in any of the provinces. The people in the provinces still wanted to be Roman (contrast this with decolonization in the 20th century)

Rebellions appear surprisingly rare, and nearly always within a generation or two of conquest.

"Remember Roman, — for these are your arts — that you have to rule the nations by your power, to add good custom to peace, to spare the conquered, and overcome the proud in war."

Pertinax was the son of a freedman, failed to get commissioned as a legionary centurion and became a schoolmaster instead, but later gained equestrian status, served in the equestrian commands, was admitted to the Senate for distinguished service, and went on to command legions, govern provinces, and in 193 AD become emperor — albeit being murdered after only three months.

"The young state, once liberty was won, waxed incredibly strong and great in a remarkably short time, such was the thirst for glory that had filled men's minds. As soon as the men could endure the hardships of war, they were taught a soldier's duties, and they took more pleasure in handsome arms and war horses than in harlots and revelry." — Sallust

Pietas: A Roman's reverence for parents, ancestors and the Gods

The Roman Republic celebrated military achievement as the greatest service of the state. No voices at Rome ever seem to have suggested that this was not entirely natural or a good thing.

Julius Caesar was particularly ambitious even by the standards of Rome. He'd rather be the first man in a tiny village than second in Rome.

Even outside the Empire, Rome was so feared that a Roman citizen would be safe from harm simply by proclaiming "I am a Roman citizen!" (Civis Romanus sum)

In the long run, there was simply no choice other than submitting to the military might and determination to dominate of the Roman Republic.

"The man who controls thirty legions is the most learned of all."

The image of Augustus was everywhere. More images of Augustus survive from the ancient world than of any other Roman emperor, or indeed any other human.

After 44 years of Augustus' rule, it had become the natural order, since no one could remember a Republic that had functioned well.

A Roman governor arriving in the Syria province: "He went to a rich province a poor man, and left a poor province as a rich man."