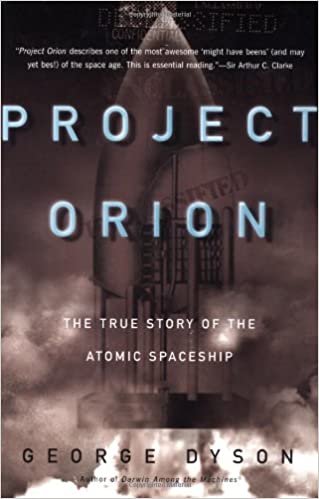 A chronicle of trying to launch a spacecraft using nuclear bombs. Yes, really. Distillation of the incredible optimism and "go get 'em"-attitude of the 1950s and 60s.

For a given rocket payload, each stage adds a factor of about four to the initial mass. Some 16 tons of chemical rocket are required to place a one-ton payload in low earth orbit. A round-trip visit to the moon, requiring five stages, takes almost a thousand tons for every ton that makes it there and back.

Scientists are more afraid of small nuclear bombs than big ones because their limited power makes them more likely to be used. The details of how to build the small bombs that would have powered Orion remain secret, while the designs of large bombs are better known.

Controlled fusion, classified under the code name "Project Sherwood," appeared closer in 1955 than it does today.

At General Atomics, there was no distinction between scientists and engineers. Everyone worked in close proximity and there were a large number of afterwork events such as weekly lectures and visiting physicists.

After less than two years, there were four laboratory buildings, a prototype reactor capable of pulses up to 1,500 megawatts, a 32 million electron-volt linear accelerator, a critical assembly building, and a 48,000-square-foot administration building, flanked by a garden featuring a 250-foot-long ornamental lagoon. A year later there were 250,000 square feet of buildings, housing some 100 individual laboratories, and another 100,000 square feet of laboratories were being built. By 1960 there were 700 technical people on staff, more than 100 with Ph.D.s.

“What the world needs is a safe nuclear reactor." Not only idiot-proof, but Ph.D.-proof.

After some talk, we felt an ultra-safe research nuclear reactor was doable. That night, Freeman Dyson and Ted Taylor invented the uranium-zirconium hydride reactor. A patent was granted and the rights were sold, according to custom, to General Atomic for one dollar each. This was the best three dollars that General Atomic ever spent.

In my seven years at the laboratory I never had to write a single proposal. In Los Alamos in the '50s somebody could get an idea, test the basic assumptions in a computer and receive the results after a couple of weeks. If it looked interesting, it went in front of a committee and if it passed, it would get put on the list for real-life nuclear weapons testing. It was possible to go from initial concept to successful nuclear test in less than a year.

The sin of the physicists at Los Alamos did not lie in their having built a lethal weapon. They did not just build the bomb. They enjoyed building it. They had the best time of their lives building it. That is what Oppenheimer had in mind when he said that they had sinned.

"In the early days of the project we were all amateurs. Everybody did a little of everything. There was no division of the staff into physicists and engineers. The ethos of engineering is very different from that of physics. A good physicist is a man with original ideas. A good engineer is a man who makes a design that works with as few original ideas as possible."

Almost every cost estimate made by a physicist is wildly wrong, and the better the physicist the worse it is.

“We shall know what we go to Mars for, only after we get there. You might as well ask Columbus why he wasted his time discovering America when he could have been improving the methods of Spanish sheep-farming. It is lucky that the U.S. government like Queen Isabella is willing to pay for the ships.”

There was no school we could go to learn how to build these kind of ships. So we just started doing it." Before political obstacles intervened, Orion's design was bounded by the laws of physics on the one hand and the laws of economics on the other. Orion's engineers worked in between.

“Economical space travel on an enormous scale seems to me to be a certainty before the end of the century. What we're doing now with chemical rockets seems quantitatively analogous to flying cargo across the country in a Boeing 707, and throwing away the airplane at the end of the trip! I expect to see the day when a round-trip to the moon will cost less than an airplane trip around the world costs now.”

N-level bureaucracies, like N-stage rockets, suffer exponentially as N goes up. Saturn 5, weighing 6,000,000 pounds at launch, was barely able to get three people to the Moon and back. There were two ways to make it go farther: add another, much larger stage at the bottom, or put something different at the top. The same goes for organizations.

Fermi's Law: If you don't fail a good part of the time you're not doing your job.