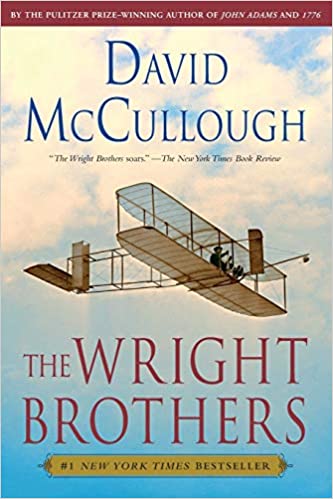 The Wright Brothers - By David McCullough

The definitive book on the two tinkerers from Ohio, providing lovely details on their youth, their experiments, and eventual success. Great read up until their first flight, after which the book becomes a bit stale in comparison.

"What is most uncharacteristic of a photo of the Wright brothers is that they sit doing nothing, something they almost never succumbed to."

All the money anyone needs is just enough to prevent one from being a burden on others.

Wilbur remained a recluse, more or less homebound, for fully three years — three years when he began reading as never before. The Wright family book collection was neither modest nor commonplace in its size.

"But it isn't true to say we had no special advantages... the greatest thing in our favor was growing up in a family where there was always much encouragement to intellectual curiosity." — Orville

In no way did the many previous failed attempts at manned flight discourage Wilbur or Orville, any more than the fact that they had no college education, no formal technical training, no experience working with anyone other than themselves, no friends in high places, no financial backers, no government subsidies, and little money of their own.

The chief need was to master skill rather than machinery. They calculated that in the five year Lilienthal had devoted to gliders and gliding, he spent a total of only five hours in actual flight. It was hardly enough and not how they would proceed.

"The man who wishes to keep at the problem long enough to really learn anything positively must not take dangerous risks. Carelessness and overconfidence are usually more dangerous than deliberately accepted risks."

The Wrights were "two of the workingest boys" ever seen, "and when they worked, they worked... They had their whole heart and soul in what they were doing."

In two months, they had made nearly a thousand glides and resolved the control problems. Now they only had to build a motor.

"It wasn't luck that made them fly; it was hard work and common sense; they put their whole heart and soul and all their energy into an idea and the had the faith."

From their first meeting, Brandreth wrote, he had judged Wilbur Wright to be a fanatic.

"The impatience of a hundred thousand people would not accelerate the rhythm of his stride."

"The best dividends on the labor invested have invariably come from seeking more knowledge rather than more power."